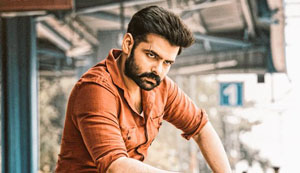 Director N. Lingusamy’s much awaited action entertainer ‘The Warrior’, featuring Ram Pothineni in the lead, will hit screens worldwide on July 14, its makers announced on Sunday.

The unit of the film also released a power-packed poster featuring Ram Pothineni. In the poster, Ram is seen sitting on an explosives box on the platform of a railway station.

For the first time in his career, Ram Pothineni will be seen playing a police officer in ‘The Warriorr’.

The film, a Telugu-Tamil bilingual, is being made on a lavish budget by Srinivasaa Chitturi for Srinivasaa Silver Screen. Pavan Kumar is presenting the movie.

It may be recalled that the production house’s previous film, ‘Seetimaar’, which released last year, had gone on to emerge as a blockbuster.

Aadhi Pinisetty plays the antagonist in this film, which has Krithi Shetty playing the female lead. She plays a character called Whistle Mahalakshmi in the film.

Music for the film is by Devi Sri Prasad and sources say that the film’s music will be one of the highlights of the film.