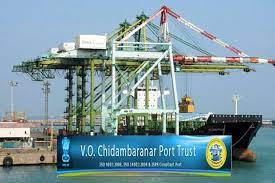 Chennai: The V O Chidambaranar Port in Thoothukudi has handled cargo traffic of 34.12 Million Tonnes (MT), against the previous year’s achievement of 31.79 MT, registering a growth of 7.33 per cent, while its income jumped to Rs 636.29 crore during the financial year 2021-2022.

‘It is also a matter of pride that the Port surpassed the 34 MT target set by the Ministry of Ports, Shipping and Waterways for the 2021-22 fiscal on 30 March this year.’

The Port has handled 7.81 lakh, Twenty Foot Equivalent Units (TEUs) of Containers during the year, registering an increase of 2.49 per cent over previous year’s container traffic of 7.62 Lakh TEUs.

The Port has seen an improved performance in terms of operational efficiency.

For promoting Port based industries under Coastal Employment Unit (SPEEDZ), land parcels to an extent of 60 acres have been allotted in a phased manner for industries such as Edible Oil, Refinery, Food Processing and Warehouses.

In addition, Port has allotted 12.79 acres of land, including water area, for setting up of a Cement bulk terminal.

In addition, the Port also proposes to develop Outer Harbour with two container terminals (Continuous Quay length of 1000 metres each), with draft of 16 Metres, in the first phase through PPP mode, in addition to a 100 MW Wind–Solar hybrid renewable energy park on PPP basis.

‘I also take this opportunity to thank all the Employees, Trade Unions, Terminal operators, enterprising Port users and Stakeholders for their unstinted support for the growth and development of the Port’, he said.