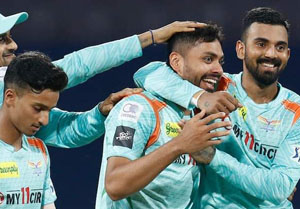 Mumbai : The Lucknow Super Giants Team went on to score 169/7 in 20 overs despite tottering at 27 for three at one stage and ultimately went on to win the match by 12 runs against Sunrisers Hyderabad here at the DY Patil Stadium in Navi Mumbai.

What’s pleasing is that we’ve found a way to stay in the game and give ourselves a good chance of winning. We did that again. Not ideal to lose three wickets early, but we need to give ourselves a little time since we bat deep and we have power at the death.

That’s something we need to learn as a batting group – how to do play risk-free cricket while looking for fours. But with the ball we’ve been brilliant in all three games. said LSG captain KL Rahul in the post-match presentation ceremony.

After being in deep trouble at 27 for three Lucknow Super Giants desperately needed a partnership and captain KL Rahul along with Deepak Hooda stitched a partnership of 87 runs to help their team reach a fighting total. KL Rahul top-scored for his side scoring 68 off 50 balls while Hooda scored 33-ball 51.

I’ve been playing with Hooda for the last 3-4 seasons, he doesn’t come out of the nets. Don’t really need to do so many nets when you’re batting so well, but he never comes out of the nets. He had to wait for his chance, he’s using that, and now is becoming someone you can rely on, in the middle order, said KL Rahul.

Lucknow captain KL Rahul is not worried about the top-order collapse and failure of his opening batting partner Quinton de Kock as he backs his team’s depth in the batting.

We don’t chat so much in the middle. As opening batsmen, you give yourselves a couple of balls and if the wicket is good then both openers have to go. We have that extra batter with Jason coming in, so the plan is to put pressure on the opposition.

That’s the body language we want to carry. To go out there and hit boundaries and sixes, but choose smart shots. If we lost wickets early, we need to quickly assess the situation and see what the target should be. Quinton and Lewis wanted to put pressure on Washington, but it didn’t come off, explained KL Rahul.

Lucknow Super Giants under the leadership of KL Rahul have won two consecutive matches after starting their campaign with a defeat against Gujarat Titans and now they will lock horns against Delhi Capitals on Thursday.