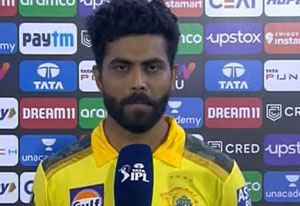 Mumbai : Chennai Super Kings skipper Ravindra Jadeja wants his team to find ways to come back stronger even as he defended opener Ruturaj Gaikwad’s poor form after his team’s third successive defeat in the IPL.

After having lost to Kolkata Knight Riders and Lucknow Supergiants in the first two games, CSK on Sunday suffered a 54-run loss to Punjab Kings.

‘I think we lost too many wickets in the powerplay and didn’t find momentum from ball one. We need to find a way to come back stronger,’ Jadeja said after the match.

Asked if he has concerns about Ruturaj Gaikwad’s form, the skipper said: ‘No, we need to give him [Gaikwad] confidence as we all know he’s a very good player. I’m sure he will come good.’ He also praised Shivam Dube, who has now scored back-to-back fifties.

‘Vaibhav was with us a couple of years back and we saw the talent. KKR picked him up, but we wanted him because he’s something different.’

‘With Jitesh, Anil bhai had seen him at Mumbai Indians. He has great intent and he’s a fantastic keeper.

The standout thing about him is his attitude. We will definitely look to play hard, positive cricket. We have to be emotionally intelligent if it doesn’t come off,’ he said.