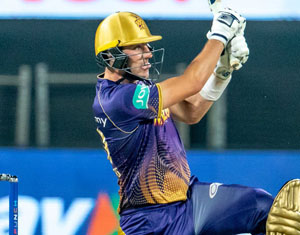 Opting to bowl after winning the toss, KKR saw MI recover from 55 for three in the 11th over to post 161 for four.

In reply, KKR chased down the target of 162 with 24 balls to spare. Pat Cummins blasted 56 off 15 balls, while Venkatesh Iyer remained not out on 50. For Mumbai, Suryakumar Yadav made 52 off 36 balls, while Tilak Varma chipped in with 38 in 27 deliveries. Kieron Pollard smashed an unbeaten 22 off five balls.

Pat Cummins, Player of the Match, said, ‘ I probably think I’m most surprised by that innings. I’m glad that it came off. I was thinking of having a swing if it was in my area. Wasn’t trying to overthink it. Very satisfying to do it on my first game this season. Was just trying to pepper the shorter boundary. The hard thing after a big auction is that there are a lot of changes from last year.

It’s a good mix of talent out there and quite relaxed with the boys.’

Shreyas Iyer, winning skipper said, ‘Extraordinary! I couldn’t believe the way he (Cummins) was hitting the ball. Because yesterday in the nets, he was getting bowled now and then, I was batting in the nets beside him then.

During the timeout, the plan was for Venky to drop anchor and tell Pat to just swing at everything because that’s what he was doing before too. When I went into bat, I told him to just time the ball because he was overhitting the ball a bit. We have to take responsibility as top order batters. All of us have the ability to hit the ball long. In the powerplay both innings, the pitch was quite the same. After the powerplay, it got a lot easier I guess.’

Rohit Sharma, said, ‘Never expected him to come and play like that [on Cummins]. Lot of credit. The pitch got better and better to bat as the game went on. It was holding up initially. Overall it was a good pitch. With the bat we did not start well, in the last 4-5 overs to get 70+ was a great effort from the batting unit.

We did not bowl according to the plan. We had the game till the 15th over, but then Cummins was brilliant. Whenever you have runs on the board, we always have the upper hand, We had them 5-down, it was just a matter of the wicket of Venky or Pat, they had Sunil who could smash them. This will be hard to digest, the way it turned out in the last few overs. We have a lot of hard work ahead of us. I don’t want to be in this position all the time [frustrated smile on being pointed out that MI have been in this position before at the start of an IPL season].’

Venkatesh Iyer, ‘ For everyone other than Pat it (pitch) looked tricky. Really happy that I was there till the end, Gotta give it to Pat, unbelievable hitting on display on a pitch that was actually very tricky to bat on.

There will be days where you may not hit the balls as well as you want, but with the batting line-up we have it was important for me to stay there till end and play that anchor role so that the rest of the batsmen can play freely and attack from ball one.’