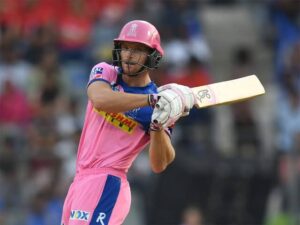 The finals of IPL 2022 will see a pulsating contest between newcomers Gujarat Titans led by Hardik Pandya and Sanju Samson’s Rajasthan Royals tomorrow.

A repeat of Qualifier 1, which Gujarat won, the finals will be held at Narendra Modi Stadium in Ahmedabad.

Gujarat Titans became the first side to qualify for the IPL 2022 final following a 7-wicket victory over second-placed Rajasthan Royals in the Qualifier 1 at the Eden Gardens in Kolkata on Tuesday.
Rajasthan took on mighty Royal Challengers Bangalore and won by seven wickets in Qualifier 2 to book a final meeting with Gujarat Titans. Jos Buttler top-scored for RR with 106 not out as they chased down the target of 158 with 11 balls to spare. For RCB, Josh Hazlewood was the most successful bowler with figures of 2/23.

The 74-match long tournament will now conclude with a closing ceremony followed by the IPL 2022 Final tomorrow.