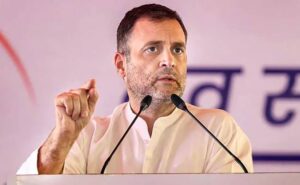 Close on the heels of controversial remark on Prophet Mohammad by BJP leader Nupur Sharma, Congress leader Rahul Gandhi has launched a scathing attack on the party.

Rahul Gandhi commented on the same with a tweet. He wrote, “Divided internally, India becomes weak externally. BJP’s shameful bigotry has not only isolated us, but also damaged India’s standing globally.”

Withdrawing her statement against the Islamic Prophet, Nupur Sharm took to Twitter that she did not intend to hurt the sentiments of any community. The former-BJP politician also clarified that her statements came at the backdrop of constant insults of Hindu gods during television debates.