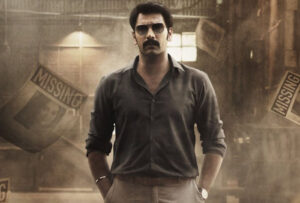 Arulnithi has turned a cop for Dejavu.

The movie also features Madhoo, Achyuth Kumar, Raghav Vijay, and Smruthi Venkat in important roles, and the film is produced by Vijay Pandi under the banner White Carpet Films and PG Muthiah’s PG Media Works. Music is by Ghibran.

Speaking about the film, Arvindh says, ‘Arulnithi was apprehensive of doing a thriller again but when he read the first half of the film, he found it to be gripping and wanted me to narrate the second half.

The film will not be a usual thriller and right from the first scene, there will be many twists and turns.

The story happens over a duration of a day and a night’.

‘Madhoo is excited about playing a cop for the first time in her career. Achyuth Kumar sir’s role is also an important one.’