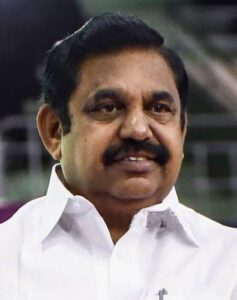 The DMK government has unnecessarily been interfering into the religious affairs, especially into the activities of Adheenams, charged Leader of Opposition Edappadi K Palaniswami on Friday.
After meeting the Dharmapuram Adheenam Srila Sri Masilamani Desiga Gnanasambanda Paramarcharya Swamigal at Mayiladuthurai, the former chief minister condemned the interference of the state government in the activities of Adheenams and said that the previous regimes of both AIADMK and DMK governments had allowed the Pattinapravesam of Dharmapuram Adheenam. But, now, the DMK government intentionally interfered in the 500-year-old tradition and attempted to stall it. “After we (AIADMK) supported the Adheenam and expressed support for the Pattinapravesam, the event was allowed and it was held in a grand manner,” he claimed.

Advising the government not to release any report against the religion and temple issues without understanding the issue thoroughly, Palaniswami said, “that is why, the AIADMK did not give any statement against Chidambaram Natarajar Temple issue. We should not interfere in their tradition.”