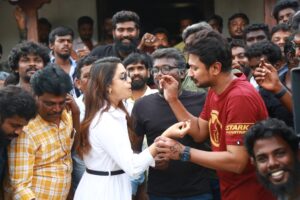 Director Mari Selvaraj’s next with Actor-Udhayanidhi Stalin, Maamannan, has completed the second schedule of its shooting.

Apart from Udhayanidhi, the film, which is touted to be a political drama, also stars Fahadh Faasil, Vadivelu and Keerthy Suresh in prominent roles.

Udhayanidhi Stalin shared pictures from the shooting spot where the cast and crew were celebrating the end of the shooting of the second schedule by cutting cake.

He wrote on Twitter, And it’s the end of Maamannan 2nd schedule.

Last and final schedule will happen only if Keerthy Suresh ma’am and Fahadh give dates. Please consider. Sorry Mari Selvaraj sir for all the torture and one mores! Thanks Maamannan team!.