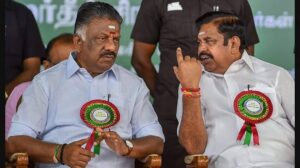 The official faction of the AIADMK led by former Chief Minister Edappadi K. Palaniswami, who has been appointed as the general secretary of the outfit, on Tuesday slammed the expelled leaders close to former Chief Minister O. Panneerselvam for attending a meeting called by the Chief Electoral Officer.
AIADMK spokesman and former minister D. Jayakumar said that he and former Deputy Speaker Pollachi V. Jayaraman were officially representing the party in the meeting convened by the Chief Electoral Officer Satyabrata Sahoo on Monday and that others who had come to the meeting claiming to be AIADMK does not have any validity.
Former legislator Kovai Selvaraj, a staunch supporter of Panneerselvam, was present in the meeting and was seated next to Jayakumar and Jayaraman and the board AIADMK was kept in front of Selvaraj. This infuriated Jayakumar and he kept the board in front of him.
In a statement on Tuesday, the OPS faction said that as per the Election commission of India records, Panneerselvam was the party’s coordinator and the person deputed by him had the right to attend the meeting called by the Chief Electoral Officer and hence Kovai Selvaraj attended it.