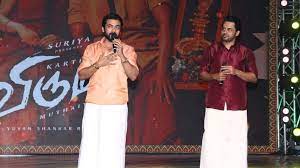 The trailer and audio of Viruman was launched at Raja Muthiya Hall in Madurai on Wednesday in the presence of national winning actor and producer Suriya, filmmakers Bharathiraja and Shankar.

Helmed by M Muthaiah, the film features Karthi and award-winning director Shankar’s daughter Aditi Shankar in the lead roles. The cast includes Soori, Karunaas, Ilavarasu, Rajkiran, Singam Puli, RK Suresh, Manoj Bharathi among others. Produced by Suriya’s 2D Entertainment, it has music by Yuvan Shankar Raja. The film is all set to hit the theatres on August 12.

Speaking at the event, Karthi, said, ‘This is my second outing with Muthiah. He is a wonderful filmmaker. His movies will harp on importance of relationships and speak about family values’.

When Muthiah narrated the story, I thought this will work out well and readily agreed to do It. My first film Paruthiveeran was made shot here and I was back to Madurai for Viruman shoot. I elated to meet people, stay here and enjoy Madurai hospitality, added Karthi.

Aditi on her part said, ‘ I feel honoured that I am entering the same industry as my father. I have given my best and I hope I make him really proud. I thank 2D, Suriya, Karthi and Muthiah for the opportunity. I think language is just a barrier. If any good project good script I am open to do.’

Muthiah said that he was inspired by rural tales in Tamil cinema made by the likes of Bharathiraja. ‘I will continue to do family dramas with commercial elements like Viruman. Lots need to be told about our culture’.

Yuvan Shankar Raja said, I share a good rapport with Karthi. Wr collaborated together in the part to give musical hits. Happy Viruman songs too have been received well’.

Shankar who released the trailer was all praise for Suriya and Karthi. He expressed confidence that her daughter would excel in her acting career.

Bharathiraja, Karunaas, Soori, Ilavarasu,, Robo Shankar among others spoke on the occasion.

Tags:filmmakers Bharathiraja and Shankar.The trailer and audio of Viruman was launched at Raja Muthiya Hall in Madurai on Wednesday in the presence of national winning actor and producer Suriya