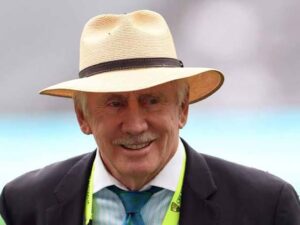 Australian cricket legend Ian Chappell has decided to end his 45-year-long stunning commentary career. The 78-year-old former Australia skipper is globally known for his intelligent views on the game and his straightforward manner of telling about them.
Chappell became a part of a distinctive voices team that backgrounded broadcasts of Australian cricket for more than three decades, alongside Richie Benaud, Bill Lawry and Tony Greig.
“I remember the day when I knew I’d had enough of playing cricket. I looked at the clock and it was five past 11 on a day of play and I thought, ‘S**t, if you’re clock-watching at that time, I have to go,’ ESPNcricinfo quoted Ian Chappell as saying.