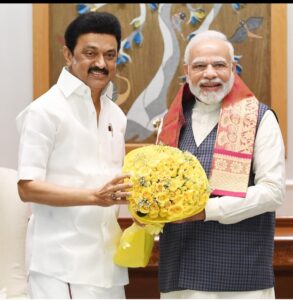 Chief Minister MK Stalin, who is on a two-day visit to national capital today called on Prime Minister Narendra Modi.
The Chief Minister thanked Modi for taking part in the inauguration of the 44th Chess Olympiad.
He also discussed about various welfare measures to be initiated in Tamilnadu. Stalin earlier in the day called on President Murmu and Vice President Jagdeep Dhankar and congratulated him.