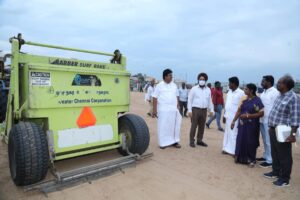 To make beaches plastic-free, the Greater Chennai Corporation has formed a team headed by the zonal officers to monitor the shops using banned plastics and persons littering at Marina, Besant Nagar and Thiruvanmaiyur beaches.A Corporation release said that since August 5, health officials of the civic body has been inspecting the beaches during the morning and evening and seizing banned plastic and imposing fine on those using such plastics.As part of the initiative, the Corporation has formed a team headed by the zonal officer comprising of national urban livelihood mission and sanitary workers who would visit the three beaches from 4 pm to midnight to identify the shops using plastics and persons littering beaches. They would be fined by the monitoring team. The team will also create awareness among the public against using plastics.

Tags:Corpn to sct tough against plastic use