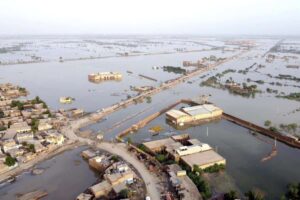 The latest information suggests that economic losses and damages caused by the flash floods in Pakistan could range between $15 billion to $20 billion, as the government fears up to 12 million more people will slip into poverty, underscoring the need for immediate and major global financial assistance.According to ‘An Early Assessment of Flood Impact on Pakistan’s economy’ report being compiled by the Ministry of Finance, the economic losses are far higher than the initial estimates of $10 billion to $12 billion, The Express Tribune reported.The economic losses have been estimated in the range of $15 billion to $20 billion, according to the preliminary report, indicating huge damages that the country sustained due to flash floods inundating large populations.There are direct $12 billion losses to the economy, the $6 billion damages to the housing infrastructure and $4 billion was the cost of livestock losses, Express Tribune reportedMost of the estimates of the economic losses are based on data compiled up to up to September 5, provided by the National Disaster Management Authority, but the number is still subject to revision.

“We have updated our earlier estimates of the economic losses to $15 billion to $20 billion in light of new information,” said Aisha Pasha, the Minister of State for Finance who spearheaded the exercise.The report also showed that the floods could further widen the trade deficit by $4 billion and the additional impact on the current account deficit is also estimated in the range of $4 billion to $5 billion.Pakistan cannot cope with humongous losses of around $15 billion to $20 billion, which is inclusive of both the direct losses to the economy and loss of the assets, and will require huge global support.Pakistan is victim of the global warming, although its contribution is less than 1 per cent.The report further states that 9 million to 12 million more people will fall below the poverty line and one million to two million people have lost their jobs.It added that 77.7 per cent of the informal labour in rural areas constitutes of women, with six out of 10 employed young women concentrated in agriculture sector, The Express Tribune reported.

Tags:Flood losses in Pakistan estimated up to $20bn