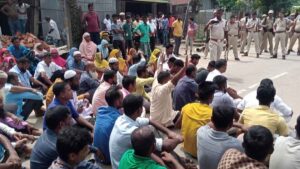 The banned Popular Front of India has for long been accused of involvement in violent acts, “instigating” protests like the one against the Citizenship Amendment Act and having “links” with global terrorist organisations, including ISIS.The ban came after over 150 people allegedly linked with PFI were detained or arrested in raids across seven states on Tuesday, five days after a similar pan-India crackdown against the 16-year-old group had led to the arrest of over a hundred of its activities and seizure of several dozen properties.

The group was formed on December 19, 2006, with the merger of the Karnataka Forum for Dignity and the National Development Front (NDF).NDF was formed after the Babri Masjid demolition and subsequent riots in 1993.Officials said PFI has been under the radar of security agencies for its alleged role in violent protests in different parts of the country against CAA, forced conversions, radicalisation of Muslim youths, money laundering and maintaining links with banned groups.It has been also accused of killing people associated with organisations espousing other faiths, collecting explosives to target prominent people and places, supporting the Islamic State and destroying public property to strike terror among people.The NIA, according to the officials, has secured 45 convictions as part of earlier probes against PFI and has charge-sheeted 355 people in these cases.Last year, Solicitor General Tushar Mehta submitted before the Supreme Court that the central government is in the process of banning PFI, which has already been outlawed in several states, including Jharkhand.Mehta also claimed that many PFI officer bearers were found associated with the proscribed Students Islamic Movement of India (SIMI).In January 2018, then Union minister of state for home Kiren Rijiju said his ministry was considering banning PFI under the stringent Unlawful Activities (Prevention) Act.Following the anti-CAA protests and subsequent violence in December 2019, the Uttar Pradesh government also recommended the Centre ban PFI.

Tags:Now-banned PFI was under radar of govt agencies for long