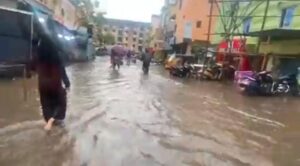 Chennai has been getting incessant shower since last night. However the IMD officials say, Overcast condition is expected to prevail over Chennai with intermittent rainfall.’ Temperature in the capital city would be at 29 degree Celsius maximum and 25 degree Celsius minimum.
With heavy rains lashing several districts, schools in Chennai, Tiruvallur, Kanchipuram, Chengalpattu, Thanjavur, Mayiladuthurai would be closed today. Schools along with colleges will be closed in Tiruvarur and Nagapattinam. District collectors of the respective districts have made an announcement on the same.
The Greater Chennai Corporation (GCC) has reported 19 tree fall incidents in the city of which about 17 were attended by 9 am.