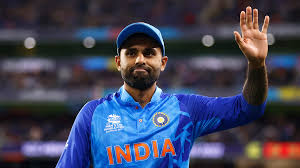 Charismatic India middle-order batter Suryakumar Yadav has retained his No. 1 position in the T20I Batting Rankings, while several England players have made significant gains after their victory in the ICC T20 World Cup in Australia.
Suryakumar became the No.1 T20I batter after a superb showing in the Super 12 stage of the T20 World Cup, where he hit three half-centuries in five innings.
That performance helped him achieve a career-best rating of 869 points. Although his rating dropped to 859 after his dismissal for 14 in the semifinal against England, his position has remained undisturbed as other batters in his proximity failed to produce any eye-catching performances.
The 32-year-old amassed 239 runs during the World Cup at an average and strike-rate of 59.75 and 189.68 respectively, and also finished as the third-highest run-scorer in the event.
Alex Hales, who smashed an unbeaten 86 from 47 deliveries in the semifinal against India, has also made a big jump in the rankings as he climbed 22 places up to No 12. Hales finished as England’s second-highest run-scorer in the T20 World Cup, with 212 runs at an average of 42.40.