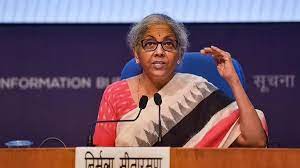 Finance Minister Nirmala Sitharaman on Friday asked the Asian Infrastructure Investment Bank (AIIB) to scale up investment in renewal energy and smart technologies and also urged the multilateral agency to set up a regional office in India.AIIB President Jin Liqun called upon the finance minister here and discussed various issues of relevance to the bank.”While appreciating AIIB’s growing portfolio in India, FM [email protected] suggested that @AIIB_Official should scale-up #investments and mobilise private finance in India’s key priority areas including #RenewableEnergy, #EnergyEfficiency and climate #SmartTechnologies,” the finance ministry said in a tweet.India is a founding member of AIIB with the second-highest voting share. India holds 7.74 per cent equity in the multilateral bank, next only to China (29.9 per cent).”As India is the largest client of @AIIB_Official, FM [email protected] reiterated that AIIB should plan to set up a regional presence in India to facilitate dialogue and outreach to the project authorities,” the ministry added.AII B began its operations in Beijing in January 2016 and has since grown to 105 approved members worldwide. The bank is a multilateral development lender whose mission is financing the ‘Infrastructure for Tomorrow’ with sustainability at its core.

Tags:FM urges AIIB to scale up investment in renewal energy