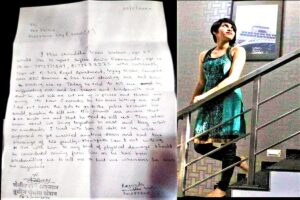 Exactly two years ago on November 23, 2020, Shraddha Walkar had submitted a written complaint to the Tulinj Police Station in Palghar of threats from her live-in partner, Aftab Ameen Poonawalla and how he threatened to “kill and cut her into pieces”.The letter, which has just surfaced, was duly acknowledged by the local police, who have also said that though they had probed the matter, Shraddha later gave another letter withdrawing her (November 23, 2020) complaint, signalling an end.In her hand-penned plea, she sounded distressed, stating that Aftab was beating her up, blackmailing her and threatening to murder her and cut her body into pieces.Nearly two years later, Shraddha’s worst fears came true with Aftab recently getting arrested for Shraddha’s gory killing in Delhi, chopping her body into many pieces and then disposing them of in installments over several weeks, even as the case created huge sensation.Shraddha, 25, had mentioned how she and Aftab, 26, were living together in Vijay Vihar Complex, and he had been abusing and beating her up for six months.“Today he tried to kill me by suffocating me and he scared and blackmails me that he will kill me cut me up in pieces and throw me away,” said Shraddha.