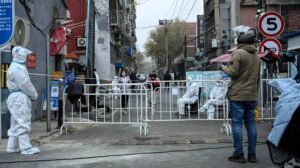 With police out in force, there was no word of additional protests against strict government anti-pandemic measures Tuesday in Beijing, as temperatures fell well below freezing. Shanghai, Nanjing and other cities where online calls to gather had been issued were also reportedly quiet.
Rallies against China’s unusually strict anti-virus measures spread to several cities over the weekend in the biggest show of opposition to the ruling Communist Party in decades.
Authorities eased some regulations, apparently to try to quell public anger, but the government showed no sign of backing down on its larger coronavirus strategy, and analysts expect authorities to quickly silence the dissent.