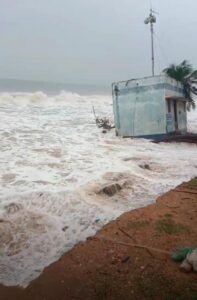 Heavy rains accompanied by strong and blustery winds lashed Chennai City, suburbs and neighbouring districts, as the weakend
Cyclonic Storm ‘Mandous’  came closer to Tamil Nadu and is all set to  cross the coast bwetween Puducherry and Sriharikota at Mamallapuram between late tonight and early tomorrow.
Met Office sources said the storm now lay centred about 130 km southeast of Mamallapuram, the epicentre, and is moving west-northwestwards at a speed of 14 kmph.
It is likely to cross the coast for the 13th time–in 121 years (met office said) from 1898 to 2021 between Tamil Nadu Nadu Puducherry coasts since 1898 to 2021–between 2300 hrs tonight and 0300 hrs early tomorrow.
As the system inched towards the Coast near Chennai, the intensity of the rain gained momentum and it was accompanied by gale winds with the speed ranging 75 kmph and expected to touch 85-90kmph at the time of
landfall.
The winds are blowing with such intensity that trees swayed to 360 degrees across the city.
Tags:Cyclone Mandus Tamilnadu Chennai