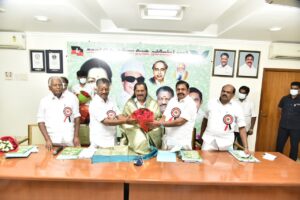 A native of Kanniyakumari district, Hussain is the MGR Mandram secretary and also headed the Waqf Board.

The party’s coordinator O Panneerselvam and joint coordinator Edappadi K Palaniswami extended their greetings to him at the meeting held at party headquarters ‘MGR Maaligai’.

Resolutions urging the ruling DMK to speed up relief and restoration works in flood and rain-hit districts and provide compensation to the farmers, whose crops were submerged in the rain waters were also adopted.