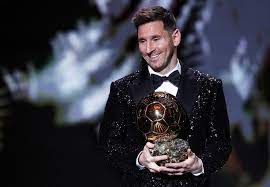 Paris: Argentina’s Lionel Messi has bagged the Ballon d’Or award for a record-extending seventh time, as his former club Barcelona’s Alexia Putellas clinched the women’s award after a stellar season with the Catalan club.
Messi, 34, beat another favourite Robert Lewandowski of Poland to receive the trophy from his friend Luis Suarez late on Monday night.
Now the Paris Saint-Germain (PSG) striker is two triumphs clear of arch-rival Cristiano Ronaldo as the five-time winner finished sixth this year, the first time that he was voted out of the top three since 2010.
Paris Saint-Germain dominated the award from 2009 to 2012 and won another two in 2015 and 2019, Xinhua reports. “It’s incredible to be here again,” Messi said at the ceremony, which was held at Theatre du Chatelet in Paris.
Two years ago I thought it was the last time. People were starting to ask me when I was going to retire but now I’m here in Paris and very happy, he added. Messi helped his country win the Copa America this summer which ended his long-waiting title-drought with the senior national team. He was also named the best player of the tournament and claimed the Golden Boot.
Despite the shocking exit from Barcelona in August, he has ended the last season with the La Liga giants in style, scoring 38 goals in 48 games and winning the Copa del Rey.
It’s a special year for me with this Copa America title. It meant a lot to win at the Maracana stadium and I was so happy to celebrate with the people from Argentina,” Messi said. “I don’t know if it’s the best year of my life — I’ve had a long career — but it was a special one with the title with Argentina after the tough times and the criticism.
Bayern Munich forward Lewandowski came second with only 38 points behind Messi (613 vs 580), which proved that the 170 juries from all over the world also highly recognised the prolific striker’s performance.
Lewandowski has been the favourite to claim the award in 2020, but the organisers finally cancelled the vote due to the coronavirus pandemic.
Even Messi admitted that his biggest contender deserved to win it last year.
The captain of Poland scored 53 goals in all competitions in 2021 for Bayern and was awarded the ‘Striker of The Year’ prize, a new award that was only announced hours before the ceremony began.
Chelsea midfielder Jorginho, having won the Champions League with his club and Euro 2020 with Italy, ranked third in the vote as Karim Benzema of Real Madrid, who is enjoying an impressive run this season, was in the fourth place.
Putellas, captaining Barcelona to a treble-winning season, won the third edition of the women’s Ballon d’Or. Her Barcelona and Spain teammate Jennifer Hermoso was second, with Sam Kerr of Chelsea coming in third.
The 27-year-old Putellas was not the only Barcelona player to take a prize the night as the 19-year-old Pedri won the Kopa Trophy for the best player aged under-21.
Paris Saint-Germain’s Gianluigi Donnarumma, who helped Italy win Euro 2020 in which he was named the best player, won the Yashin Trophy for the best goalkeeper.