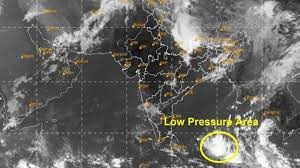 Chennai: A new Low Pressure (LP) area has formed over the the Central parts of Andaman sea and neighbourhood today, which would concentrate into a depression and further intensify into a Cyclonic storm and cross the North Andhra Pradesh and Odisha coasts on 4 December morning.

A bulletin issued by the Met office said the LP area is likely to move west-northwestwards and concentrate into a Depression over southeast and adjoining east central Bay of Bengal by tomorrow.

It would further intensify into a Cyclonic Storm over the central parts of the Bay of Bengal during the subsequent 24 hours. Subsequently, it is likely to move northwestwards, intensify further and reach near North Andhra Pradesh-Odisha coasts around 4 December morning.

Under its influence, heavy to very heavy rainfall will occur over Andaman and Nicobar Islands today and tomorrow, over North Coastal Andhra Pradesh on December three and four, over Coastal Odisha and gangetic West Bengal during four to six December.

Isolated extremely heavy falls is also likely to occur over Coastal Odisha on 4 December. Fishermen are advised not to venture into Andaman Sea for the next 24 hours, over southeast and adjoining east central Bay of Bengal on 2 and 3 December, over west central and adjoining northwest Bay of Bengal and along and off Andhra Pradesh-Odisha-West Bengal coasts from three to five December.

Fishermen out at sea are advised to return to the coast by tomorrow morning. Meanwhile, another LP area is likely to form over East Central Arabian sea off Maharashtra coast during the next 24 hours, promising widepsread to widespread rain/thunderstorm with isolated heavy to very heavy rains, accompanied by thunderstorm with lightning at isolated places over Guajrat region, North Madhya Maharashtra and North Konkan for the
next 48 hours.