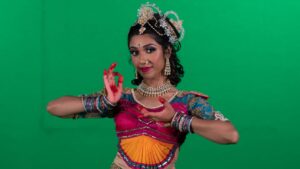 Sadhna, who won the National Award for Best Child Artiste for her brilliant performance in Thanga Meenkal, was then seen sharing the screenspace with Mamootty in the critically acclaimed Peranbu which too was directed by Ram.
A trained classical dancer, she has now recreated the magic of the epic Tamil song Kannum Kannum from the cult hit Vanjikottai Valiban for Saregama Tamil YouTube channel.
No one can forget  Sabash Sariyaana Potti the famous dialogue as an interlude of Kannum Kannum Kalandhu from Vanjikottai Valiban danced by the greatest legends Padmini and Vyjayanthimala Bali music composed by C Ramachandra and sung by P Leela and Jikki. Lyrics were written by Kothamangalam Subbu.
Says Sadhna, ‘The attempt is a tribute to the song and those behind it. We practised hard and I prepared myself for over a year’.
Since I did both the acts, I ensured that I bring out the best. Saw the song several times. Due credit should be given to my parents who motivated me the moat, she adds.
In the new video, Sadhna has danced in both the roles of Padmini and Vyjayanthimala Bali as a double action and it’s first of its kind for a remake of this song ever.
The song is remastered by legendary Veena maestro Rajhesh Vaidya and it will be released by Saregama. The camera was handled by Vijay Deepak and CG VFX are by Nagarajan Sakthivel. Interestingly, the video is directed by Sadhna herself.
The song will be released through Saregama Tamil YouTube channel and other audio streaming platforms on the 2 December 2021.