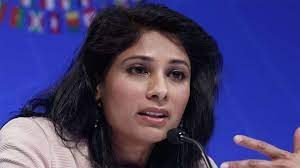 Chennai: Gita Gopinath will take over as the first Deputy Managing Director of the International Monetary Fund from January next year replacing Geoffrey Okamoto. Gita Gopinath has served as the IMF’s chief economist—the first woman to hold the post in IMF’s history— for three years.

‘I am sad to see Geoffrey go, but I am glad that Gita has opted to stay and undertake the new responsibility of being our FDMD,’ IMF Managing Director Kristalina Georgieva said in a statement announcing the decision.

Mysuru-based Gita Gopinath’s nomination as the IMF’s top economist made history in 2018, and it only took three years for the India-born woman to shatter it again. However, until she was in the seventh grade, her parents did not consider merit to be anything to be proud of. Then things took a turn for the worst.

‘A girl who had been scoring 45 percent till class seven began to score 90 percent. I had never urged or required my children to study, and I had never placed any limitations on them. Their pals visited them at home and stayed to study and play. Both of my girls used to go to bed by 7.30 p.m. and get up early until SSLC. Gita studied science at Mahajana PU College in Mysuru after finishing high school. Later, despite having excellent enough grades for engineering and medicine, she chose to pursue a BA (Hons) in economics’, said her father, Gopinath, in an interview with The Week.