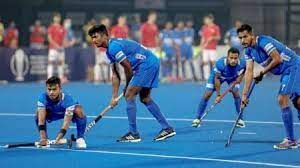 Bhubaneshwar: Defending champion India’s dream of a second consecutive Junior Men’s Hockey World Cup title was shattered on Friday as six-time winner Germany defeated the host 4-2 here.
Germany will meet Argentina in the summit clash. The Germans scored through Erik Kleinlein (15th minute), Aron Flatten (21st), skipper Hannes Muller (24th) and Christopher Kutter (25th) in the semi-final clash. For India, Uttam Singh (25th) and Boby Singh Dhami (60th) were the goal-getters.
India will play France in the third-fourth place classification match on Sunday. Germany was the better side in the first quarter and took the lead just 25 seconds from the end. Kleinlein scored off a rebound from Germany’s second penalty corner after the initial flick was saved by Prasanth. Six minutes into the second quarter, Germany doubled its lead through Flatten.
Minutes later, the Germans surged 3-0 ahead when skipper Muller found the back of the net to the right of Pawan with a reverse hit. India responded immediately and pulled a goal back through Uttam, who tapped in Rahul Kumar Rajbhar’s cross.But India’s joy was short-lived as it conceded another penalty corner seconds later, which resulted in a penalty stroke. Kutter made no mistake from the spot as Germany led 4-1 at half time. In what came as a consolation, Dhami scored just seconds from the final hooter.
Meanwhile, former champions Argentina reached the finals of the FIH Junior Men’s Hockey World Cup after beating France 3-1 in penalty shoot-out of the first semifinal at the Kalinga Stadium, here on Friday.
Both teams failed to score in the stipulated 60 minute time, forcing the match into a penalty shoot-out, where Argentina emerged victorious. Lucio Mendez, Bautista Capurro and Franco Agostini scored for Argentina while only skipper Timothee Clement found the net for France during penalty shoot-out.