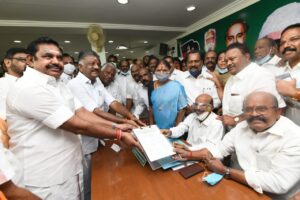 Chennai: Amid rumours that all was not well between them, AIADMK top leaders O Panneerselvam and Edappadi K Palaniswami painted a picture of unity today, as they jointly filed nominations for the party’s coordinator and joint coordinator posts, respectively.

At the headquarters here, OPS and EPS, both former Chief Ministers, submitted their papers to election officers amid slogans from party members and supporters.

After it was announced that the AIADMK would hold elections for party posts including those of coordinator and joint coordinator, the principal opposition party of Tamilnadu on Friday started receiving applications.

As per the party bye-laws, organisational elections have to be held every five years and in line with this, elections to the top two posts has been announced, a release from AIADMK headquarters said.

Filing of nominations continued till 3 pm today. The scrutiny will take place the next day and the last date for withdrawals is 6 December.

Elections will be held on 7 December and counting of votes will take place the next day.

The announcement of elections to the top posts comes a day after the Executive Meeting of the party made amendments to the bye-laws paving way for election of coordinator and joint coordinator through a single
vote by primary members of the party instead of at the General Council meeting.

The party also announced holding of organisational elections in two phases to various districts/posts from 13 to 23 December.

She alleged the party was functioning for the needs of a few and asserted the situation will ‘change soon.’

In a statement made a day after the AIADMK, led by the dual leadership of Panneerselvam and Palaniswami, tweaked its bylaws to strengthen the positions held by the two leaders, she said she would work ‘shoulder to shoulder’ with every party worker.