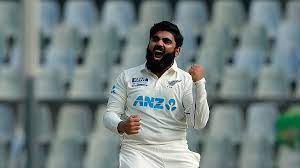 Mumbai: Kiwi spinner Ajaz Patel scripted history as he picker all ten wickets in an innings. Remember Anil Kumble had achieved this feat before against Pakistan.

India was all out for 325. Ajaz picked 10 wickets giving 119 runs in day two of second Test against India today.

Earlier after completing his 150, Mayank was dismissed by Ajaz. Axar scored 52.All the eight wickets that fell have been taken by Ajaz.

In the morning, Saha got a perfect arm ball from Patel, which he tried to play on the back-foot and did well by not going for a review which would have been a complete waste.

Ashwin coming next did waste a review as the very next delivery post Saha’s dismissal was a flighted one which drew the batter forward and turned enough to clip the bails. But for Mayank and Axar pair, the rest could not get going this morning.

Ashwin hilariously appealed for DRS without realising that he has been bowled as he had thought that the bowler had appealed for caught behind.

The review was wasted as he had already asked for it and once he realised that he was beaten lock, stock and barrel, he didn’t wait for the final verdict.