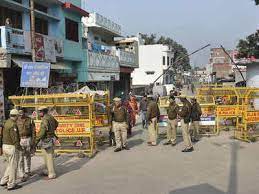 Chennai: Security has been tightened across the country to avoid any untoward incident in view of 6 December, the date on which the Babri mosque was demolished in Ayodhya in 1992, officials said.

In Chennai, vital installations such as the Central station, Koyambedu bus stand, airport and harbour have come under heightened vigil.

The Greater Chennai Police have deployed more than 6,000 police personnel at important places in the city to tighten the security and prevent untoward incidents.

In Coimbatore, security arrangements are in place from Saturday afternoon in and around the city to prevent any eventuality during the 29th anniversary of the demolition of the Babri Masjid.

Police, with the assistance of the Bomb Detection and Disposal Squad, were checking the passengers in railway stations, airport and public places.