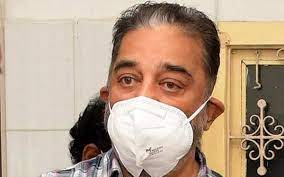 Chennai: A day after Kamal Haasan was discharged from hospital after recovering from Covid-19, he hosted ‘Bigg Boss’ season 5 Tamil.

Following which, State Health Secretary J Radhakrishnan today said that an explanation would be sought from him for participating in public events without isolating himself for seven days after his recovery from Covid.

Talking to reporters, Radhakrishnan said that it’s mandatory for any person who recovered from Covid to quarantine themselves for seven days. An explanation from the actor would be sought, he added.

On 22 November, Kamal Haasan had said he had tested positive for Covid-19 and was admitted to Sri Ramachandra Medical Centre.
In a press note after he was discharged last week, Kamal Haasan thanked the hospital staff for taking good care of him.

He expressed his gratitude towards Tamilnadu Chief Minister M K Stalin and other political leaders, actor Rajinikanth and other members of film fraternity for wishing him a speedy recovery.

Kamal Haasan also thanked people of Tamilnadu, his fans and party cadres who prayed for his recovery.

He also thanked crew members of his upcoming film Vikram and reality show ‘Bigg Boss’ for managing efficiently during his absence.