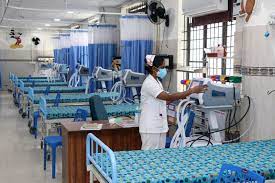 Chennai: India could see a mild Covid third wave which will peak in the early part of next year, according to experts who have been modelling the pandemic.

The Sutra mathematical model for Covid-19, developed by IIT Kanpur and backed by the Indian government, has concluded that third wave is likely to hit India early next year between January and February 2022. Professor Manindra Agrawal, who heads the project, revealed the findings of the Sutra model and the insights that emerged with it.

Prof Agrawal explained that a third wave due to the newfound Omicron variant will peak early next year. However, the wave is likely to be milder as the new variant of concern isn’t appearing to bypass the natural Covid-19 immunity in individuals in any significant way, said Prof Agrawal, contrary to recent research in South Africa.

Manindra Agrawal said that cases of the new variant Omicron will be at their peak early next year, around the same time that the Assembly elections in Punjab, Uttar Pradesh, Uttarakhand, Goa and Manipur have been scheduled.

He also noted that, across the globe, the Omicron variant is not leading to critical cases but only mild infection. The data gathered so far suggests that the variant has only mild symptoms, even as its transmissibility appears to be high.

Although a recent study in South Africa indicates that the Omicron is capable of bypassing natural immunity at three times the rate of the Delta variant, Professor Agrawal said that even this increased rate of the bypass is too limited to play a role in driving up infections. ‘If one in 100 cases infected with Delta were reinfections, the South African study shows that three in 100 cases could be reinfections prompted by Omicron. This is still a small rate,’ he said.

In their study, the team at IIT-K plotted three scenarios based on the efficacy of vaccine immunity against the new variant. The findings suggested a ‘mild third wave, with peak between 100-150K infections per day occurring sometime in Feb,’ Prof Agrawal shared.

He further said that the hospitalisation load is even lower as per the mathematical model with indications that Omicron cases are mostly mild. He did, however, say that more data is awaited to be sure of this.