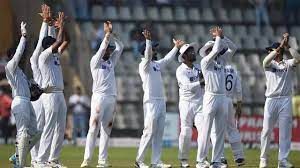 Mumbai: India carried out a decimation of New Zealand, winning the second Test by a record-breaking 372-run margin to clinch the two-Test series 1-0 with comeback-man Jayant Yadav cleaning up the visiting team’s lower half on the fourth morning on Monday (December 6). Ravichandran Ashwin (4/34) benefitted from a reflex stumping by Wriddhiman Saha and also completed his 300th wicket on Indian soil to finish the proceedings in a jiffy as New Zealand were all out for 167 in 56.3 overs.

The margin of victory is India’s highest ever on home soil. For a team that had fought tooth and nail in Kanpur, the extra bounce and turn did pose familiar problems for the Kiwis in a match they will try to remember for Ajaz Patel’s 10-wicket heroics.

Virat Kohli, India captain, said, ‘To come back with a win again, it’s a great feeling and a clinical performance. You want individuals to step up. The first Test was good, and it was a clinical performance here. We discussed the performance and the opposition played out a good draw. The bowlers tried all their best, but the Kiwi batsmen stuck it out really well in Kanpur. Here there was more bounce and the fast bowlers got assistance as well, so it gave us a better chance to win the Test match. The mindset is the same to take Indian cricket forward, even with the new management. It’s important to keep the standards of Indian cricket and make sure it’s always growing. South Africa is a good challenge. We built it up in England and South Africa last time, and Australia was an accumulation of all that experience. South Africa is a tough challenge and a win that we want to achieve as a team. Hopefully we can play in South Africa the way we know we can play, and win the series.’

Ravichandran Ashwin, Player of the Series, said, ‘ I think I’ve got 10 (Player of the Series awards now). I enjoyed Wankhede honestly, and everyday there was something new, and I could challenge both edges. It was a wonderful performance by Ajaz. It doesn’t spin all the time in Wankhede, and he used the seam and put the ball in the right places, and there was a bit of destiny involved in his 10-for too. Jayant and I have trained together, he flew to Chennai from Haryana in 2014 to pick my mind, so we have a good relation. Axar and I have played since Kings XI. I would like to go to South Africa and win a series there, we haven’t done that before, and hopefully we can do it this time.’

Mayank Agarwal, Player of the match, said, ‘It feels good to be back among the runs and this knock is special for me. I didn’t change anything from Kanpur, I just had the mental discipline and determination. The technique isn’t going to be the best all the time, it won’t guarantee runs, but the will to fight is key. Rahul bhai told me about not thinking of technique mid-series, and told me this is the technique that’s got me runs. Sunny sir said I should keep my bat low early on in the innings and opening up my left shoulder. I didn’t really think about the second hundred in the match, but should have converted the sixty. We will relish the abroad challenge in South Africa, so we’re looking forward to that too.’