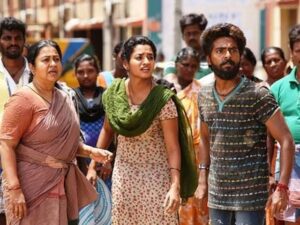 Veyyil and Angadi Theru fame Vasantabalan is all ready with his next titled Jail. Starring GV Prakash in tbe lead, the movie is hitting the screens 9 December.
Speaking about the film, Vasantabalan says, ‘All across the world, a section of people are forced to shift from cities where they were born to go and settle in interior areas. The problems that they face in the new settlement area forms the crux. Even those living in Chennai were compelled to go and settle in suburbs’.
This is not about Jail. But when you question the authorities, they would threaten to lodge you in jail. A teenager who turns a pickpocket is cursed by all. But what forced him to do so, forms the crux, says Vasantabalan.
He adds, ‘I am always passionate about cinema. I fought death and survived after fighting Covid. Cinema gave me the strength. Jail is a reflection of my concern for my society. It will carry a strong message’.
GV Prakash who scored music for Veyyil, is playing the lead besides composing tunes. Nandan Ram, son of music composer Sirpy, plays a key role in the movie. Abarnathy is the heroine. The movie has seen lot of hurdles to hit the screens now, he adds.