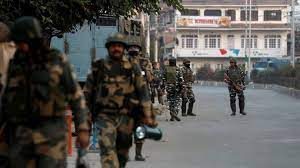 New Delhi: The Mon district of Nagaland is on the edge after an incident in which 13 civilians were killed in firing by the Indian Army on Saturday. The soldiers mistook the civilians as militants, according to the police.

Fresh violence erupted on Sunday after a big crowd of people marched to a security forces camp in Mon town and started damaging and burning buildings, a state government official said.

The 21 Para Special forces of Army ‘blankly opened fire’ resulting in the killing of many Oting villagers in Mon district of Nagaland near Assam border, the state police has reportedly alleged in its FIR against the Army unit. It further alleges that the ‘intention’ of security forces was to ‘murder and injure civilians’.

The Nagaland government on Sunday announced ex-gratia of Rs 5 lakh each to the families of the 13 people killed. Chief minister Neiphiu Rio has ordered probe.

Thirteen civilians were killed and 11 others injured by security forces in two consecutive incidents of firing, the first of which was possibly a case of mistaken identity.