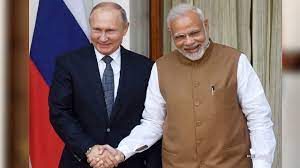 New Delhi: Russian President Vladimir Putin is in New Delhi today to attend the 21st annual India-Russia summit. This will be the first in-person meeting between Prime Minister Narendra Modi and Putin after their meeting on the sidelines of the BRICS summit in Brasilia in November 2019.

In his second overseas trip since the pandemic, Putin seeks to bolster military and energy ties with a traditional ally being courted by Washington.

Several agreements to deepen cooperation in defence, trade, space, technology, energy and culture are expected to be inked during the summit.

The Russian President is scheduled to hand over the model of an S-400 air defence system to Modi.

For the Modi government, Putin’s visit means more than just bolstering ties. Reportedly, India also needs Russia to keep up weapons supplies as it remains locked in its worst border standoff with China and New Delhi also wants more of a role in Afghanistan where Russia along with China and Pakistan remain key players following the Taliban’s takeover.

‘The friendship between India and Russia has stood the test of time,’ PM Modi told Putin at a virtual summit in September. ‘You have always been a great friend of India.’

It is only the Russian leader’s second trip abroad since the coronavirus pandemic began — he skipped both the G20 and COP26 summits this year — after a June summit with US President Joe Biden in Geneva.
Before the summit, there will be an inaugural session of the India-Russia 2+2 dialogue, where Russia’s Defence and Foreign Ministers will hold talks with their Indian counterparts. This highlights the increasing mutuality of strategic interests between the two close partners. Reportedly, the dialogue is expected to focus on ‘political and defence issues of mutual interest’.