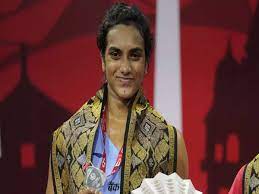 Denpasar: Indian badminton ace P V Sindhu settled for a silver medal at the BWF World Tour Finals after going down meekly against Korean teen sensation An Seyoung in the summit clash, here on Sunday.
Sindhu, the reigning world champion and two-time Olympic medallist, could neither match the pace nor breach the defense of the world number six Korean, losing 16-21 12-21 in the 40-minute lop-sided clash.
It was Sindhu’s third successive loss — all straight games — to the Korean in as many meetings.
With this victory, An Seyoung became the first-ever South Korean woman to win the season-ending title. It was also her third straight title in Bali, following wins at the Indonesia Masters and Indonesia Open in the last two weeks.
Making her third final appearance in the year-end tournament, world number seven Sindhu looked a pale shadow of the player who had claimed the title in 2018 to become the only Indian to achieve the feat.
Up against the 19-year-old Korean, Sindhu once again looked short of ideas. She couldn’t mount her attacking game or make use of the full court.
A Seyoung looked more polished at the nets and rode on her good quality of strokes. She produced some sensational full stretch diving saves with her swift movement to blunt Sindhu’s game plan.
The Indian had a forgettable start and was left to fight a tough battle after lagging 0-4.
Sindhu played a good rally to log her first points with a cross-court return. She tried to narrow the gap by engaging her rival in rallies but An Seyoung was quick on her feet and showed better anticipation to always keep her nose ahead.
The Korean doubled the lead to 16-8 after the resumption. Sindhu tried to make up the deficit with a few good points but the Koreans managed to collect eight-game points.
Sindhu saved four-game points by putting pressure on her opponent’s backhand, while the Korean also sent one long. A Seyoung, however, sealed the opening game with a body return.
The second game started on an even keel with Sindhu managing to take a 5-4 lead for the first time but the agile Korean was quick to wrest back the lead after the Indian went long twice.
The teen shuttler soon extended her lead to 10-6 as she was relentless in the rallies, sending everything back to Sindhu. A razor-sharp return on her opponent’s forehand gave her an 11-8 advantage at the break.
After the interval, An Seyoung continued to control the proceedings, galloping to a 15-8 lead with another exceptional full dive return.
In a jiffy, An Seyoung grabbed a massive 10 match point. Sindhu saved two before sending one to the net as the Korean celebrated.
Sindhu will next look to defend her title at the World Championships in Huelva, Spain starting December 12.