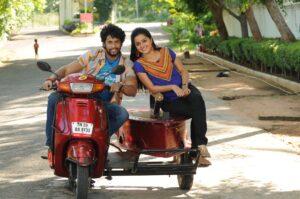 The film has Vil Ambu fame Samskruthy in female lead role and is directed by debut filmmaker Manika Vidya, who was an assistant to filmmakers Rasu Madhuravan, Manoj Kumar and Tarun Gopi.

Says Manika Vidya, ‘The hero protagonist is a water supplier in Madurai, who happens to be a drunkard as well. It revolves around a clash between the hero and a newly appointed District Revenue Officer.’

‘The District Revenue Officer’s role is very crucial in the movie. It has powerful dialogues. It was even liked by many leading artistes and finally we zeroed in on

She has delivered a laudable performance’, he adds.