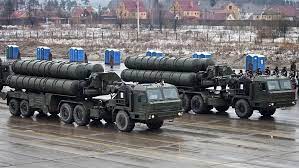 Despite pressure from Washington, India signed a $5.5 billion deal with Russia in 2018 for five of the surface-to-air missile systems, giving the Indian military the ability to shoot down aircraft and missiles at unprecedented ranges.

Hours after India and Russia held their maiden 2+2 dialogue, Prime Minister Narendra Modi and Russian President Vladimir Putin held the 21st annual summit on Monday. They also discussed the evolving situation in Afghanistan, especially the security situation and its implications in the region, besides condemning the cross-border movement of terrorists.

Both the nations inked a deal for joint production of over six lakh AK-203 rifles in Uttar Pradesh, and also signed 28 MoUs and agreements including that on a programme of the Military-Technical Cooperation from 2021-2031.

Prime Minister Narendra Modi said India and Russia have not only cooperated with each other without any hesitation but have also taken special care of each other`s sensitivities. PM Modi said, There have been many fundamental changes at the global level in the last several decades.

A lot of geopolitical equations have emerged. But India-Russia friendship has been a constant among all these variables. Both the countries have not only cooperated with each other without any hesitation but have also taken special care of each other`s sensitivities. It is truly a unique and reliable model of inter-state friendship.

The Prime Minister said the two countries are adopting a long-term vision to deepen the relationship in the economic sector and have set a target of $30 billion in trade and $50 billion in investment by 2025.