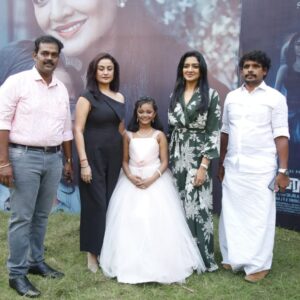 The horror thriller Grandma, directed by Shijinlal SS, saw its trailer released recently.
Speaking at the event, the ditector said, Shooting important scenes during pandemic was a great challenge’.
Sonia Agarwal, Vimala Raman, Charmila are playing the lead roles. Hemath Menon, who is a top league actor in Malayalam movie industry is playing the antagonist’s character. Child artist Pournami Raj J is essaying an important character in this movie. Jayaraj R and Vinayaka Sunil have produced this movie Grandma for their banner of GMA Films. Apart from helming the project, Shibi N has written story and screenplay. Yeshwanth Balaji K is handling cinematography, Aswanth Raveendran is handling editing, Shankar Sharma is the music director, Amal Dev JR is the makeup artist, Abdul Nizam has written dialogues for the film. Mukesh Rajha is the stunt master. Rakesh is the art director.
Producer Jayaraj R said, ‘We shot this film during the pandemic phase in Kerala and it involved lots of challenges. We had to shoot a major chunk of the movie for 12 continuous days. I am thankful to the entire crew for being totally supportive.’
Vimala Raman said, ‘Initially, director Shijin approached me for a different project, but later we happened to end up with ‘Grandma’. Although ‘Grandma’ is a horror film, working on it was really enjoyable. Sonia Agarwal and I have been good friends for a long time. Working in ‘Grandma’ was like a reunion.’
Sonia Agarwal said, ‘This is a moment of thanksgiving as I am really grateful to the producers for offering me this opportunity. I thank director Shijin for getting me on this project. Without Vimala Raman, my experience would have been odd as I was scared to stay inside my room alone while shooting for a horror film. I thank the whole crew for making me feel comfortable on the sets.’