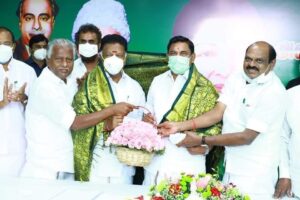 Amid shouting of slogans by scores of party cadres hailing them, the elections of the two leaders to the two top posts were announced by election officers C Ponnaiyan and Pollachi V Jayaraman at the AIADMK headquarters here as the last date for withdrawals drew to a close at 4 pm.

Since theirs were the only nominations filed for the posts, they were declared elected unopposed, Ponnaiyan said.

Both the leaders filed their papers on 4 December and the papers were found in order during scrutiny yesterday, following which they were declared elected unopposed.

As per the party bye-laws, organisational elections have to be held every five years and in line with this, elections to the top two posts was announced for 7 December.

The election to the top posts was held in the backdrop of the Executive Meeting of the party making amendments to the bye-laws paving way for election of coordinator and joint coordinator through a single vote by primary members of the party instead of at the General Council meeting.

The party also announced holding of organisational elections in two phases to various districts/posts from 13 to 23 December.

Soon after OPS and EPS were elected for the top posts, they announced that the party would hold State-wide demonstrations on 9 December, condemning the DMK government ‘for not paying attention to people’s problems’.

They said the agitation had been called to demand a cut in the State VAT on petrol and diesel, assistance to people affected by floods, adequate compensation to flood-hit farmers and the Pongal gift hamper for all, besides condemning the DMK regime for seeking to close Amma Clinics.

Sources said OPS and EPS have decided to be aggressive against the DMK government and also to take on the party’s expelled general secretary V K Sasikala together.