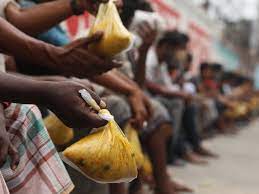 Geneva: Growing food insecurity that is already affecting tens of millions of people across West Africa and the Sahel, must not be ignored by the international community, UN humanitarians said on Tuesday.

The alert comes as new data from the region indicated that almost 36 million people are expected to be acutely food insecure by the time next year’s lean season comes round. This is usually in June, July and August, but it could start as early as March.

This represents an alarming 24 per cent increase on 2020, according to the latest Integrated Food Security Phase Classification (IPC) survey, which aid agencies use to gauge levels of need.

“Behind these numbers, there are real people,” said Ollo Sib from the World Food Programme (WFP). “We did travel recently across the region. Almost everywhere we went, people are worried.”

The IPC survey pointed to 2.6 million people in IPC level 4 which denotes emergency status, and a further 13,600 in famine-like conditions (IPC5) in inaccessible parts of Borno State in northeast Nigeria.

Sib, a WFP senior researcher based in Senegal, said that the agency needs some $700 million to assist people for the next six months.

In total, 38 million in West Africa, Cameroon and CAR will not be able to meet their basic needs, food included, without external support, he told journalists in Geneva, via Zoom.

Highlighting Burkina Faso as an example of wider regional vulnerability, Mr. Sib explained that healthcare workers there had told him that they were now seeing double the number of admissions compared to usual.

This was a worrying and unusual development, he explained, given this is still the harvest season.

Among the reasons for this deteriorating situation are years of exceptionally dry conditions and poor harvests in the Sahel, which have increased competition for land and water and heightened tensions between farmers and herders.

This has contributed to higher food prices in the region, which are in general 30 to 40 per cent higher compared to the rest of the world, explained WFP’s Mr. Ollo, Senior Research and Assessment and Monitoring Officer for West and Central Africa Region.

In Bol, in Lake Chad region, pastoralists sell cattle to buy cereals, he said. Last year, with one cattle sold, they could buy seven bags of millet, or more. But this year, they told me they are getting only five bags of millet.

Persistent insecurity in the Sahel and Nigeria is also driving the acute hunger crisis, since farming communities now feel too unsafe to stay to plant seed or harvest their crops.

There are even fears among previously calm coastal communities in northern Côte Ivoire, Benin and Togo that the armed groups are getting ever closer, Mr. Ollo said, in a call to regional governments to do more to protect their citizens.

To make matters worse, the Covid-19 crisis has left people overwhelmed, the WFP official continued, pointing to a joint coronavirus impact probe by ECOWAS, WFP and the Economic Commission of Africa (UNECA), that indicated that extreme poverty has increased by three per cent between 2020 and 2021.

The reduced availability of pasture and the limited mobility due to insecurity will pose tremendous challenges to pastoralists in the next few months, warned Amadou Diop, IPC-CH Regional Advisor for Sahel and West Africa.

Briefing journalists in Geneva via Zoom, Mr. Diop explained that the total number of appealed for international assistance to safeguard pastoralists’ livelihoods ahead of the lean season, which is usually from June to August.