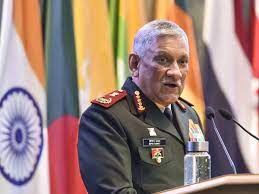 In a tweet, Defence Minister Rajnath Singh said, ‘Deeply anguished by the sudden demise of Chief of Defence Staff Gen Bipin Rawat, his wife and 11 other Armed Forces personnel in an extremely unfortunate helicopter accident today in Tamil Nadu.’

He added: ‘His untimely death is an irreparable loss to our Armed Forces and the country.’

Prime Minister Narendra Modi, Chief Minister M K Stalin and leaders from across the country have expressed condolence over the demise of General Rawat, the first Chief of Defence Staff of the country, and others.