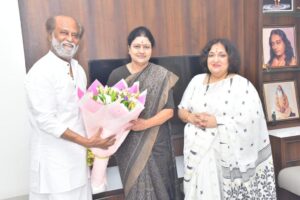 During the meeting, Sasikala greeted the actor for being conferred with the Dadasaheb Phalke award. Sasikala also enquired about his health condition.

Later, photos were released to the media in which Sasikala was seen presenting a bouquet of flowers to the actor and his wife Latha Rajinikanth. Sources described the meeting as a courtesy call.