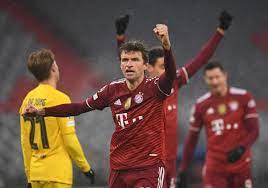 Madrid: Five-time European champions Barcelona lost to Bayern Munich to miss out on the knockout stages of the Champions League for the first time in 17 years.

Barca have not been absent from the last 16 since 2003-04, when they did not qualify for the competition at all.

This exit continues a miserable campaign for the Spanish giants after financial issues forced them to let club legend Lionel Messi leave on a free transfer and then join Paris St-Germain in the summer.

Barca needed to match Benfica’s result to advance, but the Portuguese side won 2-0 at home to Dynamo Kyiv, leaving Xavi’s men third and facing a Europa League knockout round play-off.

The game, played in snowy conditions and without fans because of a rise in Covid-19 cases in Germany, had got away from the visitors by half-time.

Bayern scored their first when Robert Lewandowski’s cross found Thomas Muller and his header just crossed the line, before they doubled their lead thanks to a superb 30-yard strike from former Manchester City forward Leroy Sane.

Jamal Musiala added a third goal in the second half with a routine finish after a pull-back from Alphonso Davies.

Barcelona had chances to take the lead when it was goalless but Jordi Alba, who later went off with a hamstring injury, had a shot saved by Manuel Neuer and Ousmane Dembele also wasted a chance by firing over.

Bayern advance as group winners with a 100% record. Benfica finished on eight points, with Barcelona, who only scored twice in the entire group stage, on seven points.