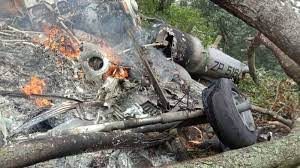 Chennai: The Katteri-Nanchappanchathram area near Coonoor, where a helicopter crashed killing CDS General Bipin Rawat and 13 others, has come under the control of the army.

A high level team has reached the spot and started a detailed probe into the incident that has left the whole country in shock.

General Bipin Rawat was alive and able to say his name when he was extricated from the wreckage of the Mi-17V5 chopper along with another passenger, later identified as Group Captain Varun Singh, said a senior leading fireman who was among the first to reach the crash site.

‘In contact with destination control.’ That was the last message from the pilot of the Mi-17V5 to Coimbatore ATC before the aircraft changed over to the Defence ATC around five minutes from landing at the Wellington base on Wednesday.

General Rawat, 63, took charge as India’s first Chief of Defence Staff in January 2019. The position was set up with the aim of integrating the three services – the Army, the Navy and the Air Force.

A former Army Chief, General Rawat was also appointed the head of the newly-created Department of Military Affairs.

Confirming the deaths, IAF in a tweet said ‘With deep regret, it has now been ascertained that Gen Bipin Rawat, Mrs Madhulika Rawat and 11 other persons on board have died in the unfortunate accident.’

Gen Bipin Rawat was on a visit to Defence Services Staff College, Wellington to address the faculty and student officers of the Staff Course today when the tragedy occurred.

The chopper took off at 11.47 am from Sulur and was heading to Wellington when it crashed at 12.20 pms about 5-10 km and five minutes before landing.

Even before the police, fire service, district and revenue officials could reach the spot, locals jumped into the rescue act and made all attempts to douse the fire, which raged for more than an hour as the fuel tank was full.