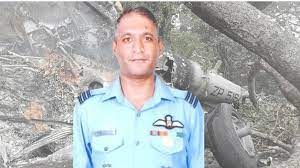 Coimbatore: Group Captain Varun Singh, the sole survivor of the IAF chopper crash on Wednesday, who had been undergoing treatment at the Military Hospital in Wellington is being shifted to the Air Force Command Hospital in Bengaluru.

Group Captain Varun Singh, the only survivor of the helicopter crash in which Chief of Defence Staff General Bipin Rawat and 12 others were killed, is critical, but stable. Defence Minister Rajnath Singh told Parliament that he is on life support and ‘all efforts are being made to save him’.

Group Captain Singh is being treated for severe burn injuries at the military hospital in Wellington. He will be shifted to Bengaluru, his father, Colonel KP Singh (retired), said.

On his son’s condition, he said: ‘I can’t say anything about that…I am not sure.’ ‘He is critical but stable at the moment,’ said officials.

Group Captain Varun Singh has dodged death a second time while on duty.
The IAF officer had survived a life-threatening emergency while flying the indigenous Tejas light combat aircraft in October last year.

A Shaurya Chakra, the country’s third-highest gallantry medal, was conferred on him on Independence Day this year for his quick-thinking and actions during the emergency. At that time, he had little inkling that another tough test for survival awaited him just a few months away.