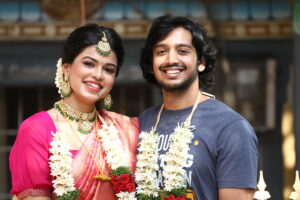 Produced by Fidi Talkies, it is written and directed by. Lakshmi Devy. Music is by Achu Rajamani and Varun Menon. Cinematography is by Abinandhan Ramanujam and editing by Anthony Gonsalvez.

Speaking about Kadhal Engr, Lakshmi Devy, grand niece of veteran actress Administer, says, ‘It was a conscious attempt to do a music video which is witty and lighter at heart. My earlier film was raw, real abd violent. My mother insisted that I done that is not serious. Kadhal Enge is a result of this. It is about a youngster who proposes a girl in different periods spanning centuries. Did they reunite at least in this birth or not forms the crux’.
We completed the shoot in three days. Intense research went behind shooting the song for it has reflect various eras and should look authentic, she adds.
Lakshmi also thanked Shrisha, music composer Achu Rajamani and editor Anthony. Abhinandhan Ramanujam’s camera was a huge plus, she adds.
Darshan, who plays the male lead is grandson of thespian Sivaji Ganesan. He says, ‘I auditioned for Lakshmi’s film. But couldn’t do the project. But she felt I would be appropriate to do the music video and hence chose me’.
‘Acting is in my genes. But to get good roles, you have to work hard. My journey has begun and I hope to go places’.
Interestingly Shrisha, a model-actress is from the family of veteran actress Sridevi. She thanked the cast and crew and said shooting was a real fun.
Lakshmi Devy had recently filmmaker won the prestigious Gold Remy Award for Direction at the 54th World fest Houston International Film Festival for her film When the Music Changes.